Peckham, inc., obtains government contracts to employ disabled people and is affected by the shutdown.

Peckham is based out of Lansing, Michigan, and was founded by Ralf Peckham who was the head of the Michigan Rehab department. His original goal was to hire people with mental illness who faced significant barriers to employment.

Peckham opened their high tech call center in Grand Rapids 4 years ago. They are a nonprofit organization that trains and hires people with disabilities to do meaningful work at a high level of competence. These are people who our society and businesses have left behind. Have deemed unworthy of employment and the dignity that comes from being able to support themselves.

ADHD, sensory disorders, back injuries, blindness, autism, paraplegic and quadraplegia, depression, and anxiety are some of the conditions that qualify someone to work at Peckham.

Since Peckham opened here, many of these employees have become independent, bought their own houses or rented an apartment. A few have gotten married. They have moved on, finally, with their lives.

Marie was in the initial group of hires at Peckham four years ago. Since then, as many of you know, she has bought a condo, and we live with her. This condo is a blessing for us.

Marie graduated from Davenport University with a bachelor’s degree in accounting. Because of her disability, autism compounded by a mild brain injury at birth, she could not find a job for four years. She persisted in her efforts to find employment and sent out many resumes, volunteered for nonprofits, and eventually found limited part-time work at Mel trotter in accounts receivable.

So when the opportunity for employment with Peckham came up, she decided to go a different direction and try something new because her accounting degree was seemingly of no use. So Peckham trained her in tech support. She has real world certification. Tier 1 tech support, and she continues to train for additional certifications. She is also currently in the process of obtaining an associate’s in programming from grcc. She’s about halfway through. She’s a straight A student in this endeavor. I say this not just because I am proud of her. I say this because these are the kind of people that our capitalist system misses out on. UnEmployment among capable people with disabilities is multiple times the general level of unemployment.

So yesterday because of the government shutdown, 30 people were laid off at the Grand Rapids Peckham location. Marie’s hours were reduced to 30 a week. As the shutdown goes on, she could be laid off as well. Wednesday she had one chat in 7 hours. Yesterday 2 chats. She has training and experience in several areas at Peckham, plus seniority. Over the weekend she used two vacation days so others could work.

The government agency she primarily does support for, the US Forest Service – the firefighters who fight the fires in California for instance, has laid off most of their employees. That’s considered a non-essential government service.

The government agency she works for primarily provides tech support for, the US Forest Service – the firefighters who fight the fires in California for instance, has laid off most of their employees. That’s considered a non-essential government service.
After Marie had worked for Peckham for a year, we spent a year trying to help her become independent through buying her own condo or renting an apartment. We toured apartment complexes and condos. We came close to signing a lease and to making an offer on a condo, but stopped at the last minute. Then Ralph was diagnosed with cancer. At that point, we made the decision to help Marie buy a condo with the understanding that we would live with her and share the expenses. And a condo just happened to be available. I’m so thankful we have this arrangement. She has some cushion. I know she’s anxious as anyone would be. we are doing okay for now. But I think about the employees who have their own apartment for the first time or are supporting a family.
And I say all this just in case you don’t know anyone who is affected by the shutdown.
We need to let our president and our representatives know they should work toward a real compromise. President Trump said in a tweet a couple days ago that a shutdown didn’t matter that much because it is mostly affects Democratic employees. I’m sure there are some conservatives that are affected as well. Aside from being tone deaf, that demonstrates contempt for ordinary people.
The employees at Peckham are not federal employees. They are collateral damage that has not been reported on in this government shut down.

There would have been no horses in our lives. Despite extended effort, Will and Patty were not able to learn to ride bikes due to motor skill impairments. Instead, they rode Fred and Bill once a week for five years. 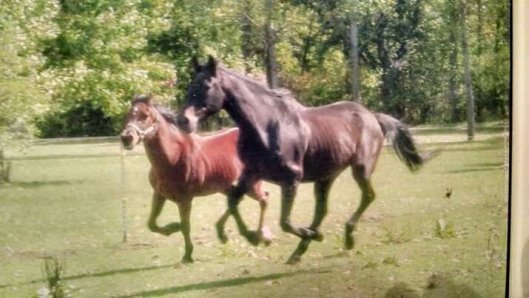 We came. We saw. We snagged the right apartment, we hope.

When Patty moves in August to begin her masters degree studies, she has a tiny efficiency apartment to move into. A place to call her own. She chose to pay for a furnished apartment so that she would not have to buy furniture.

I struggled with whether we should make the effort and spend the money to travel 400 miles (one way) to the university to get our feet on the ground to make the all important decision regarding where Patty would live for the next year. I said to the Lord, “I need your help.” The next day, I suddenly felt that we should go. I can’t explain it. That evening I came home from work and a substantial check had arrived in the mail as the result of an overpayment in our escrow fund.

We made a hotel reservation and I took the the days off from work. I prepared my mind to be the only driver for an 800 mile trip. My friend lent us her GPS for the trip.

I had to trust the instructions of the GPS (“Tom”) to get us through multiple cities with many construction zones, merging and forking major highways. I also had to learn to trust Patty, who navigated the entire trip. I couldn’t look at Tom’s screen or her cell phone map. Listening to her directions was the only choice. We were very tired when we arrived, but we made it safely to our destinations. 11 hours there, and 9 hours back.

When we arrived in the college town, we found information  regarding housing we couldn’t see on online maps and Google Earth. The University is in mountainous country. The city and campus are perched on steep hills. We eliminated one complex based on its location on a steep hill. There really is no substitute for being there.

As we neared the end of our journey there, Patty became very quiet. I spoke about the way the mountains would be part of her experience. She said she was feeling sad about leaving home.

“Don’t try to minimize my feelings,” she answered. “I am allowed to feel sad about leaving home.”

My daughter is about to strike out on her own. On the second night, I could not sleep as I struggled with how she was going to make it on her own. I wanted to keep her safe. To make sure she had enough to eat. To get around on her own. After many sleepless hours, I said to the Lord, “I need your help.” I finally fell asleep.

The next day, she signed the lease for her first apartment. She didn’t need me to be a guarantor. Her award letter detailing her tuition waiver and stipend was enough. She has already shown her ability to provide her own way.

Our trip there and back again was essential, important. And part of the process of letting go and letting her find her wings. 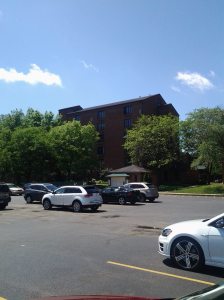 But here we are in 2015. I am not going to make any resolutions, but here are some wishes, changes, goals, and events that I would like to see for this year.

1) Ralph to gain 10 good pounds. Not due to edema. Muscle and fat would be good.

2) Direction from all of his doctors together regarding effective measures to restore his health.

4) I want to get rid of more stuff. Last year I took several trunk loads of stuff to Goodwill. A large, old four bedroom house with walk-in closets and a full basement can hold a lot of stuff. I am not a hoarder, just a forgetter. Out of sight, out of mind they say…and there is plenty of room here to put things out of sight.

5) I would like to see Mary get succeed at a full-time job and move toward independence. Maybe get her own apartment.

6) I would like to move to a smaller place, with fewer maintenance needs and outdoor chores. (Part of simplifying my life).

7) Patty to get into grad school and move away from home.

8) Patty to get her driver’s license, and help me with some driving chores this year before she moves away.

9) Will is in the process of trying to buy a house. I would like to see him do that.

10) Do more things together with Ralph. The last few years, as the kids graduated from college, I’ve had more “free time.” I filled up that time with choir, our local writing group, my scrapbooking group, my quilting group, and other activities. Ralph’s health problems have brought a screeching halt to all of this. I think/hope he is starting to feel better. I want to be very careful about what I add back in. I want to include something that is “us” time on a regular basis. And I did go to scrapbooking and quilting last month. Those are once a month meetings. Writing was twice a month, and choir is a big commitment (once a week and some Saturday rehearsals, plus Sunday). I need some ideas for “us” time. 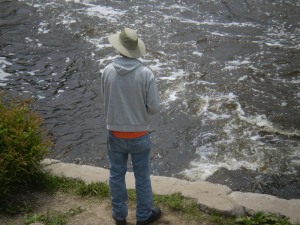 Will came home for my birthday this weekend. The family went to see Fiddler on the Roof at the local theater last night.

A lot of Will’s friends in college were theater people.

Of course this begs the question…