“Ann, I have to go to the hospital,” he said. “I have been having awful cramps all night long. I let you sleep as long as I could, but I can’t stand it any more.”

I got out of bed and put on some clothes, half awake. He went to sit on the toilet, where he suffered more cramps, but made no progress. He was in so much pain that I had to help him put on his shoes.

“Maybe you need to go in an ambulance,” I said.

“Are you sure we shouldn’t call an ambulance?”

I woke Patty up and told her that I was taking Ralph to the hospital, and to tell Mary when she woke up.

I went out to the car and threw my purse, my Kindle and my crochet bag in the back seat. Just two weeks before we had gone to the hospital in the late evening for IV fluids because he had become so dehydrated from a water pill, along with five days of vomiting from a stomach bug. We were in the emergency room for five hours and they discharged him. I also grabbed a Kashi bar and put it in my purse. This time I was prepared for a boring stay in the ER.

Then I went back in, waited for Ralph, held the door for him as he came out to the front porch and locked the door. I helped him down the stairs and out to the car.

At 4:45 in the morning, the streets were deserted. We were quiet most of the trip. As we neared the hospital, I said, “They’ll probably have us stay for just a few hours, and then send us home. It’ll be like last time.” He grimaced in pain, but didn’t reply. It sounded stupid to my own ears.

I pulled up in front of the Emergency entrance.  The attendant saw me helping Ralph out of the car and quickly brought out a wheel chair. He said, “You can park your car over there,” and motioned to the Emergency parking lot.

After I parked the car, they brought us back to a room, and I helped him undress and get into a hospital gown. Nurses, Physician assistants, doctors came in and asked him questions. The first question after the introduction was always, “Would you tell me your name and your birth date,” after which they checked his wrist band. Then they asked him how he was feeling, when it started, etc. When he couldn’t answer, I answered for him. They took his blood, started him on IV fluids, and started him on morphine.

And at the end of each encounter they asked, “Do you have any questions?” I was never able to come up with a question. Maybe they gave us just enough information. Maybe we knew we had to wait for the results of the x-rays, the CT scan, the blood tests. Maybe I was bewildered. I didn’t know what to ask. I didn’t know what I should ask.

After the CT scan results came back, the nurse told us that the surgeons would be talking to us in a few minutes. Surgeons.

Not too long after this, a young doctor came into our room.

“We’re going to admit you,” he said to Ralph. “The CT scan showed a bowel obstruction. We will try to to treat it conservatively. Keep you for three to five days, and see if it will work its way out. Or you might have to have surgery. Depending on how busy the hospital is, you will be admitted to either a room or will be boarded in the emergency room. The hospital is very busy right now so you’ll probably be boarded, but it is the same thing.”

“You will be admitting him?” I said. “Not for observation. It’s a matter of what our insurance, you know,” my voice trailing off. I had heard there was a big difference between being held for observation and  being admitted. The bills had started to trickle in for our visit to the emergency room two weeks earlier, and I found myself counting the cost, chastising myself for it at the same time. Not the time, I thought. Not the time to be thinking about money.

“Yes, he will be admitted, not held for observation,” the doctor said. “In a few minutes you’ll be moved to another location in the hospital.”

He left us, and a few minutes later, a physician’s assistant came in, took Ralph’s IV bag off the hook and attached it to the bed. He handed me a plastic bag for Ralph’s clothes. The PA put Ralph’s shoes on the bed, and I picked up the bag of clothes, my crochet bag, put my Kindle in my purse, and followed Ralph up to the cancer ward.

Why hadn’t I thought to bring a Kleenex with me? 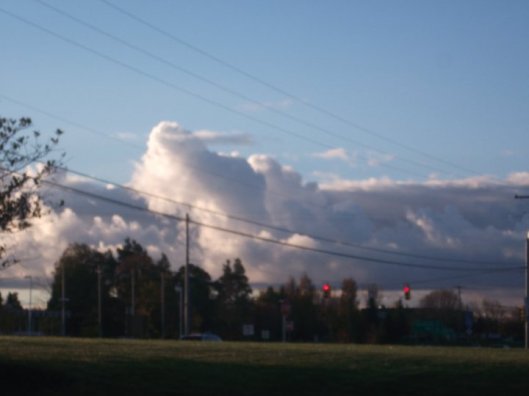 20 thoughts on “A Sudden Storm”